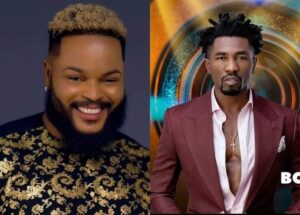 Ex-Big Brother Naija housemate, Boma has addressed allegations that WhiteMoney receives information from outside the house.

Pere had accused WhiteMoney of getting information that he and Maria were the wildcards from one of the crew members.

Recall that only WhiteMoney predicted correctly that Pere and Maria were the wildcards.

Pere has severally insinuated that WhiteMoney was fake because he correctly predicts things about the show and must be receiving information from someone outside the house.

However, when asked about the allegation, Boma said WhiteMoney doesn’t receive information from anyone.

He claimed WhiteMoney has a discerning spirit and Pere is being hostile because he sees him as a competitor.

“Whitemoney has a discerning spirit, although Pere is my guy, he is in the house to play the game. He is a good player.

“If you are his competition he will make sure he removes you. Even if I am his friend if Pere had the opportunity he will remove me because of competition.”