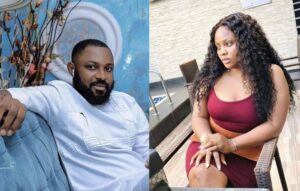 Evicted Big Brother Naija housemate, Tega, has opened up on her husband cheating in their marriage.

Recall that Tega’s husband Ajmoney had while reacting to her escapades in the house blamed himself for her actions.

Tega’s husband said he cheated in their matrimonial home and the mistake has caused so much damage.

He had said if Tega is doing or saying anything to spite him, it’s because he deserves it.

But speaking on Tuesday, Tega who refused to shed more light on the allegation said she would not cheat on her husband because he cheated on her.

“That is a personal matter, I know he is the one that said it but it is still personal to me.

“The way I live my life is different, your action cannot make me do anything. I react based on how I like and not because someone offended me.

“I was just catching cruise and enjoying myself in the house.

She maintained that she doesn’t regret her actions because it has happened already.

“I don’t regret anything, there were good times and bad times and it came with growth. I cannot trade those moments for anything in the world, I can’t change anything that happened because it has happened already.”