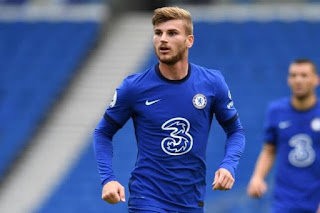 Chelsea Football Club new signing is currently one of the top strikers in the world right now. The ₤48million pounds is showing glimpse of what he will offer to Chelsea as he recently scored for his new club against Brighton during their pre season game.

The new Chelsea signing Timo Werner, apparently did not miss a single chance in the recent training session Face screaming in fear

Timor is guaranteed in scoring 20 minimum goals in the up coming premier league season!!

Chelsea have been ruthless in the transfer window, haven’t signed the likes of Hakim Ziyech, Kai Havertz , Ben Chilwell, Thiago Silva, Malang Sar and so others.

Checlsea will be looking to challenge the like of champion Liverpool, Manchester City, Manchester United and others in the 2020/2021 premier league season.

Check out Video of Timor Werner In Training Below:

He is guaranteed scoring 20 minimum goals in the PL this season!! pic.twitter.com/lNqEdPZskO